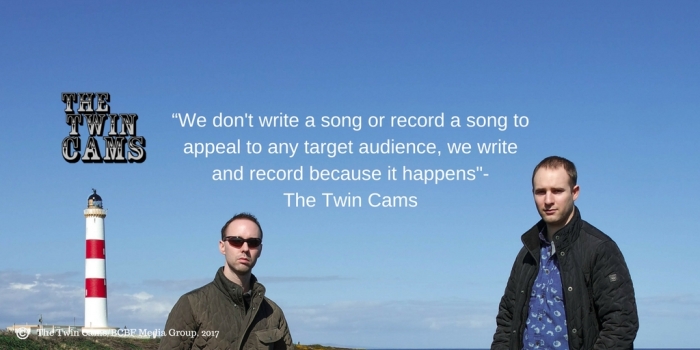 It is true the internet has made the world turn faster while becoming closer. There is also the element of attitude to speed up the process of compliments and recognition in the world of holding a mic and singing a song then putting it online and claiming to be in a band. For the most part, its a rather disgusting situation as the let downs after listening to the streaming of those songs meets disappointments just as a doughnuts with no sugar. Then there are exceptions and in this case its The Twin Cams.

This particular band from Milton-Invergordon, Ross-shire, Scotland, The Twin Cams, who are led by two constantly gigging two brothers Tim and Matt Rattigan, claims to have gotten it right or simple doesn’t care. That is of course as long as the music is delivered.

In the spring of 2017, The ‘Cams  seems to have recognized the advantages and disadvantages of being from a rural part of the world while utilizing the instant distribution systems and platforms of delivering music. Confidence is a word that has yet to be overly saturated on the favorable instant gratication platforms in which these pair support however they are filled with confidence.

“We don’t write a song or record a song to appeal to any target audience, we write and record because it happens. It’s not as easy as breathing, we’re good enough at this to be able to do it in our sleep, songwriting is difficult, but when an idea comes along it can become a catalyst really and some magic just happens.”- Tim Ratigan stated.

The first question any true music listener would ask is; “Really, is that so?” Before leading into a list of questions to challenge the duo, I let Mr. Rattigan rant. My thoughts were he had better say something different or at the very least live up to their own hype because that rope in which himself and Matt has placed around their neck, will most likely get a new nickname.

Tim concluded; “The internet has changed things so much now that we don’t feel that being in any particular location is better than another as far as success is concerned – while some locations offer more gig opportunities than others, the difference between such locations is very small compared to the volume that can be targeted via the internet when it comes to gathering fans – we would even go as far as saying that for any band who is yet to be discovered, it is very possible that an audience will take to them if they happen to see them by chance while on a night out. However the truth of it is if you are half decent, most intoxiated individuals will enjoy what they hear – But how many of them will remember you the morning after? – Some will, but the majority will carry on with their lives because you have served the purpose of entertaining them for 45 minutes or so.”

It is a fact that some levels of  confidence comes from being located in a remote part of the world that on any given night there is an amazing musician that will subsequently out do each other in what is called a “session”. Then again, what if you transcend both and  the follow the rules of song writing, which is laying down tracks that are in your heart.

Judging by the opening tunes on their debut “The Same Four Walls” six track E.P., the band seem to be aware of what is out there in the big world of kitchen bands, but they have purposedly stayed true to their roots.

Or buy the E.P here: