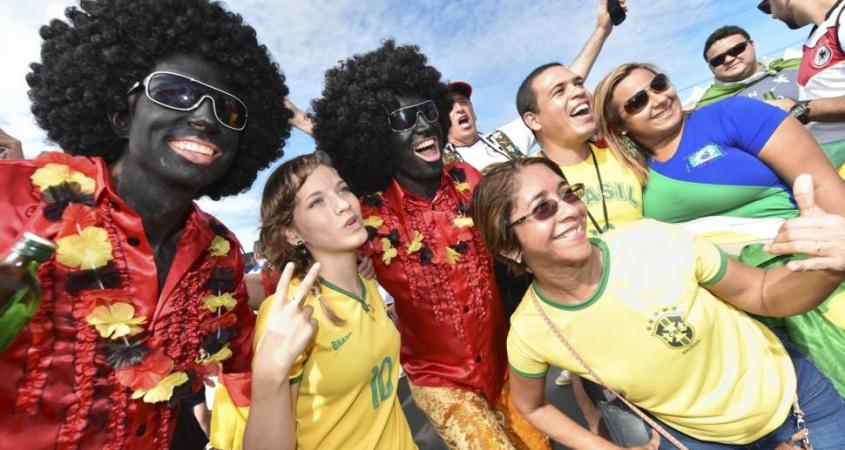 In January 2015, the stories published on racism in  futbol has become boring. This piece is in regards to the lack of efforts from those who are involved in the current status of racism in Futbol.  Its becoming apparent that the efforts of  “Zero Tolerance to Racism” isnt working.  We have to ask ourselves; “Is there a better way of dealing with the problem that are protecting the officials that can control the problem?”

If Gordon Taylor, the president of the Professional Futbol Association in England, has acknowledged the problem, then why haven’t there been more presssure on the sponsors to extended their “(CSR)-Corporate Social Responsibilities”?  There has been advertisements during major matches but a limited and controlled amount of responses from the coaches and players.

Compared to 25 years ago, the sport of Futbol is led by the media which is financed by  advertisements.

In the English Premiership, where shared media dominates the global networks, there is  minimal coverage on racism in sports. The public knows it’s there, the organizations have always known, and finally the players within their boundaries are acknowledging it. The difference in today’s game is the effect it has on corporate finance.

The business trading secrets of the game is becoming more restricted yet the racism has become more exposed via the new age media platforms. The multi-billion dollar question is: What are the Corporate Social Responsibilities of the sponsors?

It is a well known fact that there are no Black Managers  in top Futbol Leagues. The major clubs are displaying the lack of confidence in hiring black managers. The hiring of black managers at a pretigious club could be mark a change in the opinions of the fans and supports of the club. Futbol is a tradition in the European society which is led by community influences and the aforementioned could be a historical landmark in the sport. Perhaps the advertisement banners from the head of the clubs could display “Change is whats needed”, or “Trust in our decisions”.

FIFA nor the top leagues are making it mandatory for the clubs to interview potential black managers. The published stories of  comparing the Rooney Rule, which exist in American football is irrelevant. However, comparing the American Sports system to the rest of the world is not only irresponsible but dillusional. The monetary value and sports marketing concepts has become similar, but the ethics within the E.U. are completely.

FIFA  creates campaigns to fight against spectator racism. They have sponsors and rely on the cooperation of the sponsors. Without giving to much attention to what more FIFA could do, those campaigns are making little difference. There has to be more pressure on league officials and the futbol clubs.

The sponsors, which employs all nationalities in their global offices,  have little to no choice but to act on the race issue. Sports marketing is entering a new frontier and finance garned through the sport is measured in billions.

How would Lebron James, who happens to be a minority shareholder in Liverpool FC, react to his fellow brothers being called monkeys during the matches? Surely there has been some information transmitted during the due diligence of the currency exchange. Was the due diligence process based around ignoring race issues in order for Mr. James to dispurse a check?

Appointing Black futbol ambassadors would be ideal if there was effort to build  race relations from the governing bodies of futbol.

All of the players, who are contracted to play the game as employees are aware of the racism. However, their reactions have limits because the contracts signed does not stipulate unconditional tolerance of spectators reactions or opinions.

The reaction to spectator discrimination is left up to the club officials who are predominantly white. The reality is racial comments has been made for years. The difference today is, those comments are exposed because of the new age media platforms.

Its hilarious that all sports are dominated by people of colour but tackling spectator racism in sports is a mediocre priority.Why are we tolerating it? Does the money earned sooths the wounds or strenghtens the blinds?

The most avoided question is; “Do they care?”

“Is racism in sports exempt from the moral responsibilities of the European Union?”

The lack of inability from the governing body of Futbol to control racism in the sport is clear. Because of those inabilities, the E.U. have increased interest in imposing measures to protect the human rights of the players.

The Article 13 Treaty of Amsterdam, which protects civilians from racial discremination thoughtout Europe was suggested, however it has little to no influence over spectators descrimination. Ironically enough the spectators who hurl the abuse are the supporters of the clubs without whom, the clubs would not exist.

To conclude the  efforts thus far are duly noted, but those efforts does not represent the  results.

The website of Luther M. Siler, author of fictional things