To close Black History Month, I was asked why the majority of our readers this month were caucasion, instead of those who should celebrate the individuals who drew the blue print for “their opportunities and progression” in our world. – people of color.

Prior to taking the defensive stance, I had to succomb to the embarrassment of the truth. All of a sudden the relevancy of this weeks featured story became more relevant, we choose Harriet Tubman.

The WorthJourneys’ blog is a blog based on facts in our attempt for our readers to engage in the information posted and gather more facts for themselves. If one find those facts educational, then please utilize the tools of our brave new world and share it. If by chance the aformention action does take place, then our joint efforts and objectives would have been met.

Harriet Tubman, whose original name was Araminta Harriet Ross, was one of nine children born to Harriet “Rit” Green (mother) and Ben Ross (father). Because slaves were not recognized as civilians, historians have estimated Araminta (Harriet) birth was between 1820 and 1825. (ref.1)

In 1844, Arminta (Harriet), married a free slave by the name of John Tubman. To honor her mother, Araminta changed her name to Harriet while carrying the surname of her husband. Harriet and her husband were later seperated by her choice to live a life of being free. Harriet eventually escaped from slavery, while her husband decided to remain in the south.

Abolitionism and The Underground Railroad:

In 1849 Harriet, escaped from slavery fleeing to Philadelphia, using the “Underground Railroad”. (ref.2) Harriet – later returned to free up to her entire family.

The first series of trips is when Harriet, earned the nickname “Moses” for her courage and leadership. Those courageous voyages resulted in the Fugitive Slave Law. 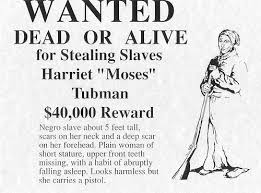 The Fugitive Slave Law stated that escaped slaves in the North could be captured and returned to the south. This led to law enforcement officials in the North aiding slave capturers. – (Hint -12 Years a Slave).

During her courageous escapdes of freeing more slaves Ms. Tubman was qouted as saying;

Harriets response to this law, was to re-route “The Underground Railroad” to Canada – where slavery was prohibited.

During the Civil War, Harriet worked for the Union Army as a cook and a nurse. As the first woman to lead a combat expedition, Harriet was recognized as the leader in the Combahec River Raid.This event liberated more than 700 slaves in the South Carolina.

After the Civil War, Harriet re-married a Civil War veteran by the name of Nelson Davis. The couple, with their adopted daughter Gertie, resided in Auburn, New York.

Harriet, died of pneumonia in 1913, in the home that was named after her : “The Harriet Tubman Home for the Aged”