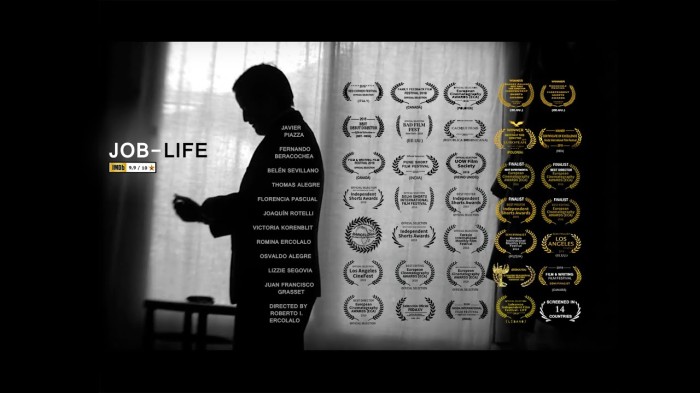 For the life of me I don’t know why indie film festival award winning director Roberto I. Ercolalo started this relevant piece in Spanish without subtitles. According to the films advertisement, the following film has been selected to numerous festivals. Its your call as well as evaluate some of those festivals selection committee members. *Just saying!

Within the first 45 seconds of the short film Job Life, the director has his point across. This nineteen and thirty-six second black and white short describes how certain individuals within the Argentinian work force live to work as the burden of their job cements their oppression.

To appreciate the work of Mr. Ercolalo one would have to watch the film more than once while applauding the soundtrack composers Tomás Alegre and Victoria Korenblit  which may be the beckoning for such a second glance. Unfortunately both carry the film as oppose to the message that the director is attempting to convey.

Could his message be; “Some people has little to no choices with their career or is it in Argentina there are little to no opportunities once you start a career?”-

The drainy deposition of the film is one that some of us movie goers have when we are recovering from the fear of a brilliant weekend on a rainy Sunday while preparing to go to work the next morning. If you are looking for an uplifting film then you may want to check the next dial.  However if you want something that would make you appreciate the life you have while re-assessing your current career status then this is one for you.

Within the film overview, Ercolalo is quoted: “There is a message in the film.” We were looking for something that wasn’t so obvious.

By no means are we announcing an ill-rating for the film but we do think that Job Life will be appreciated more in the future once we are blessed with more work from Roberto I. Ercolalo.