“Next year will be my year!” “Next year will be my year!” For years, I would tell myself over and over again, I was going to the Oktoberfest in Munich, Germany. The year 2019 was the year. September to be exact. The event was always on my bucket list, but somehow I never made it my priority. Finally, during this past summer after saying I would go so many times I decided to make it happen. I booked plane tickets for late September and started to plan my trip. Being a woman of colour it’s safe to say that I was more than a little hesitant to be going to Germany alone. After booking the trip anxiety kicked in and I really started to question if this was the right decision for me. All of a sudden every bad article or internet video flashed into my mind. After a slight breakdown, I had to remind myself that you can’t always believe what you read or view online. 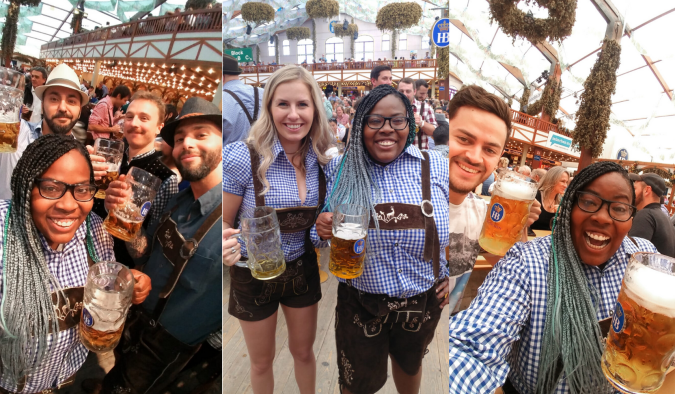 This gave me even more of a reason to go rather than my initial Ocktoberfest dream. I needed to put my fears aside and take a leap of faith that everything would turn out alright. I “put one foot in front of the other” and just did it. Upon arriving at the hostel, I immediately made friends with others staying at the hostel who were also attending the well-renowned gathering in Munich.

Oktoberfest turned out to be one of the best experiences I have had. I met so many amazing people and the German people were not as cold as expected but rather the exact opposite. They were inviting, generous and probably the friendliest people I have met thus far in Europe. Oktoberfest was my original motive but the friendships I made and mutual understandings of our different cultures is what it was about- the positive energy was priceless.